By: Ryan A. Skinner

When I read the news that San Jose Sharks had acquired Mike Hoffman from the Ottawa Senators, my initial reaction can be best described by ESPN 8 “The Ocho’s” color commentary man, Pepper Brooks:

Really? Did I not just excoriate you for resigning Evander Kane to a massive deal and losing your 2018 1st round pick (granted, your record with first rounders isn’t stellar) for a guy who has been a problem off the ice and then you go and get yourself involved with THE SINGLE BIGGEST OFF ICE PROBLEM CURRENTLY IN THE NHL?

I was just preparing my next Doug Wilson excoriation piece and then, 5 minutes after the first transaction, he flipped the script on everyone and made out like a bandit in what will probably be the trade of the year for the Sharks:

OK Doug, we get it, you are apparently MUCH smarter than me AND the majority of GMs in the NHL. Lets break down this trade piece by piece and get to the real meat of the issue, why this set of deals was an absolute stroke of genius and why the Sharks may just be more dangerous than I thought. First lets start with the official press release from the team(s) and then break down the pieces of this three team trade.

First of all, this release just adds questions to the Hoffman situation. It is not hard to read into this that they saw Hoffman as a “Character issue” and you don’t even have to do any mental gymnastics to arrive at that conclusion from this document. Second of all, it’s now apparent, if it wasn’t already, that Pierre Dorian is going to drop a depth charge straight into the heart of this team and start from scratch. This is the right decision for the team, even if it is literally the only one available to him.

So when you look at the stats and picks here, it looks pretty lopsided, yes? Well with many speculating that Hoffman may even be “Untradable” until the charges against his fiancée are settled, it’s a wonder that they got this much. It’s incredible to think, that before all of this broke, they could have easily gotten a low first rounder for him, more than likely in addition to actual assets.

And then, things got REALLY interesting: 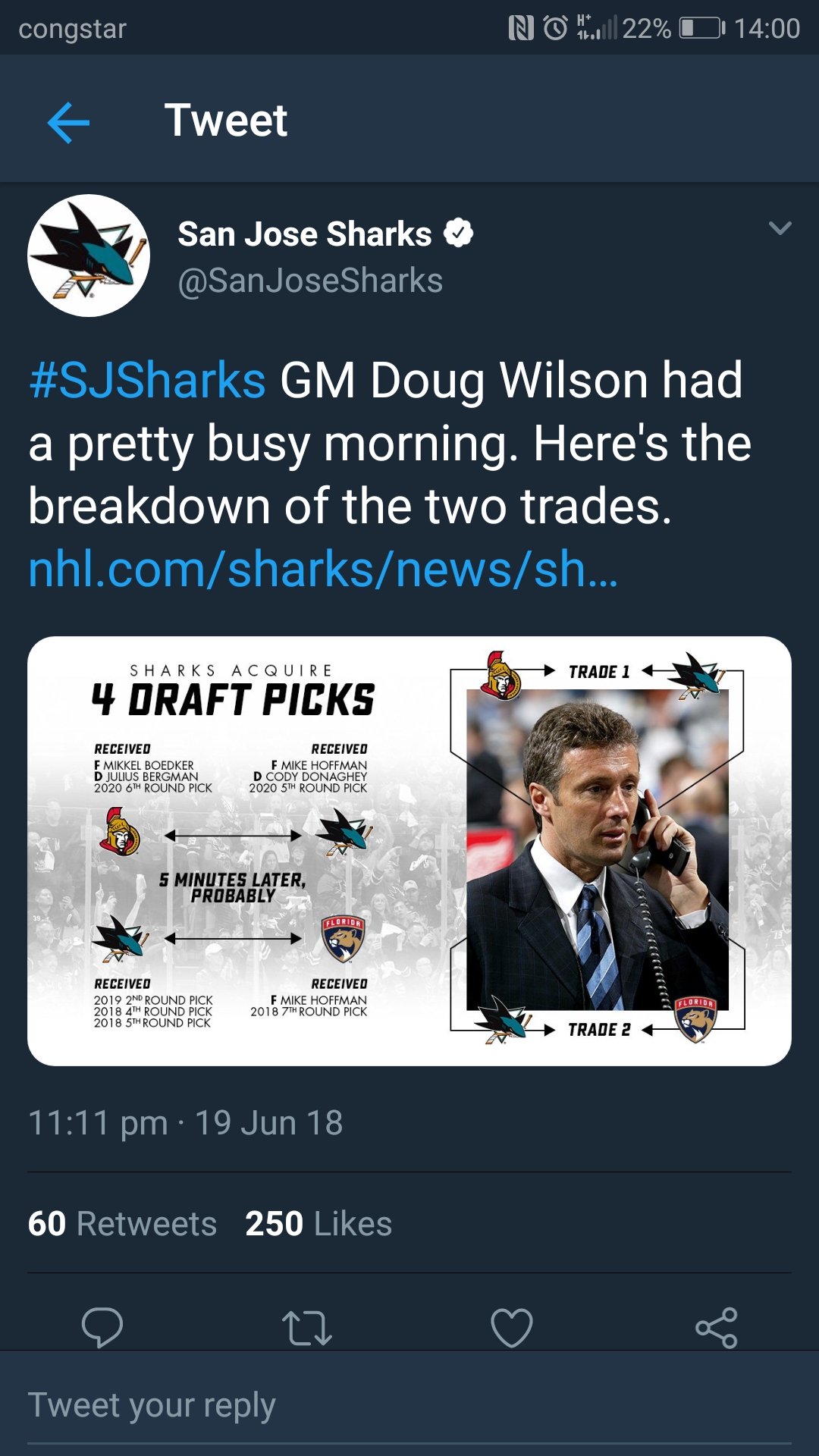 Within 5 minutes, Doug Wilson spun right around and traded Hoffman to the Florida Panthers for a 2019 2nd Round pick, a 2018 4th rounder and a 2018 5th rounder and no physical assets. Wilson had this to say about the trades:

In this press release, we see the true genius of this deal; it saved the Sharks a pretty penny in cap space which one must assume will be used in the hunt for one of the available UFAs this summer AND it shipped that potential locker room issue right back out of San Jose and right back into the same division where he came from in the first place. Brilliant.

This isn’t to say though, that Florida loses out on this deal either. Not enough can be said about Hoffman’s ability and talent and in Florida he is EASILY a top 6 guy which can’t hurt their chances at the playoffs this year. The question is, is it worth the risk of potential off ice issues or potential personal issues (Should Caryk be found guilty) involving family drama which could end up distracting Hoffman from his on ice job? Florida believes that this is the right decision and While I can’t argue with the man’s skills, I can’t help but look at Florida’s embarrassing track record in the last few years with regards to moves. I hope I’m wrong, really, because I would love to see the Panthers make the playoffs but now we just have to wait and see how this all develops.

The fact of the matter here: Everyone thought that Hoffman’s value had tanked, including Ottawa, Ottawa traded Hoffman to San Jose for Peanuts, San Jose turned around and flipped him for 4 total picks in the next 3 years and a defensive Prospect. and LOOK AT THAT CAP SPACE IMPROVEMENT! 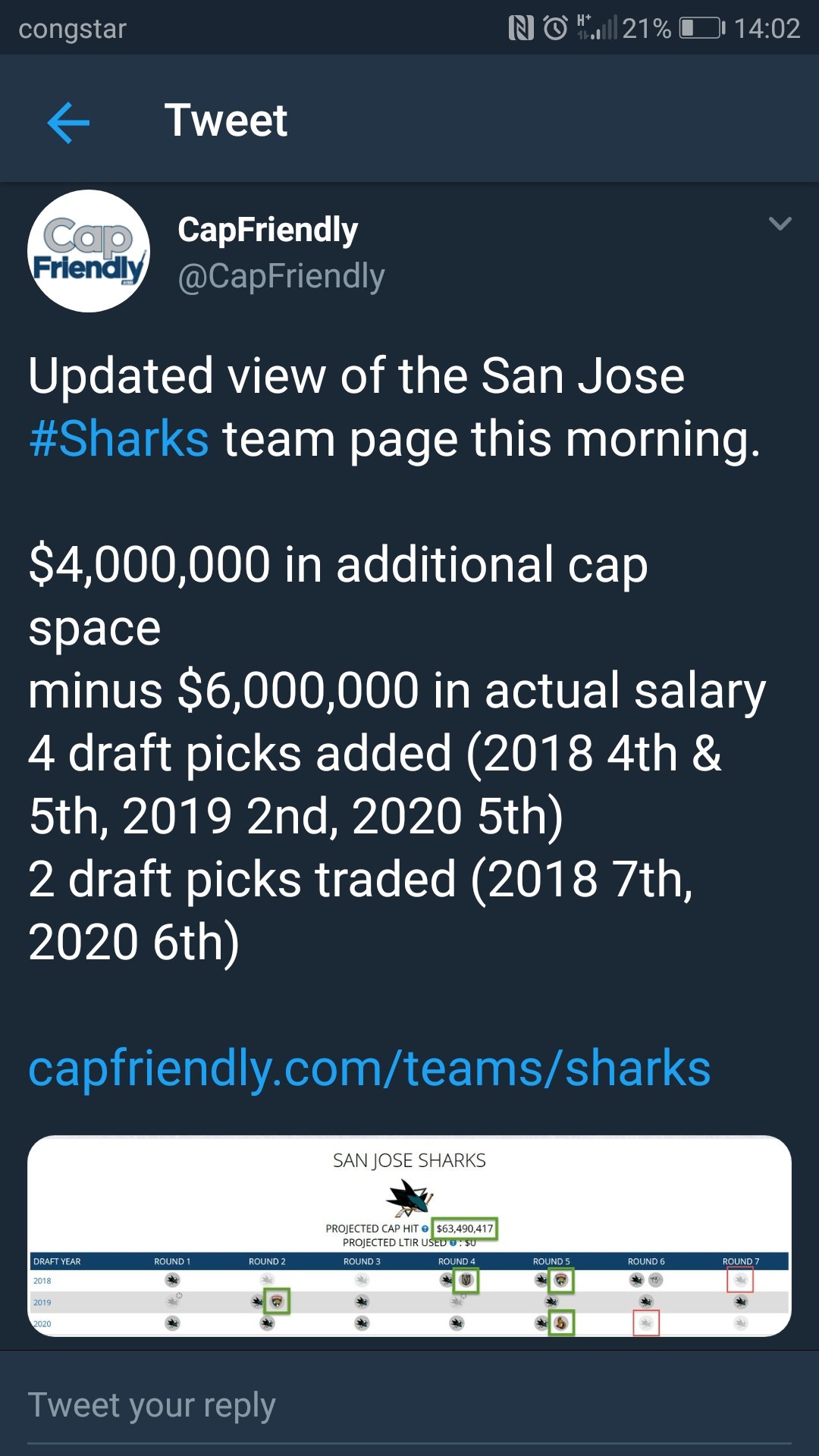 So whats next? Do the Sharks make a run at Tavares? Kovalchuk? Both? Someone else? That all remains to be seen but what we now know, if we didn’t already is that Doug Wilson means business this year, and he’s more than willing to fleece as many teams as he must in order to do it.

Hockey Blog covering the NHL, specifically the Vegas Golden Knights. We also have authors from other fan bases such as the San Jose Sharks and the Washington Capitals.